Hi I’ve got sonicpi, pd, audacity up and running but I can’t get SooperLooper to work with pisound.
Do I need a special setup for this looper? 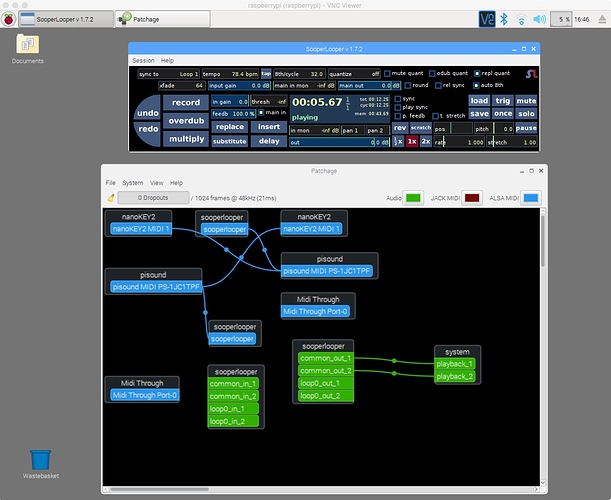 Hey, we haven’t tried running SooperLooper ourselves, but I think it requires Audio Input data to be provided, so it has something to work with. The MIDI seems to be used for playback / tempo control.

If I load a sound file into SooperLooper I can hear its output via the headphone out but not via the pisound.
But its not that urgent. I’ll use pd for now and setup SooperLooper later. Thanks

I see, this indicates that the ‘system playback’ devices in Patchage seem to be the ones from the RPis built in audio device, it may need to be reconfigured to use Pisound instead, and that would explain why there’s no audio input (a.k.a. capture) devices shown.

I think you should be able to use the qjackctl to start the Jack server using Pisound, and connect the software and hardware ports using it. I haven’t used Patchage myself, so I’m not familiar with the settings it provides.