Hey guys! As the Midihub birthday is coming up this weekend, we’re releasing a new feature we’re sure everyone will appreciate 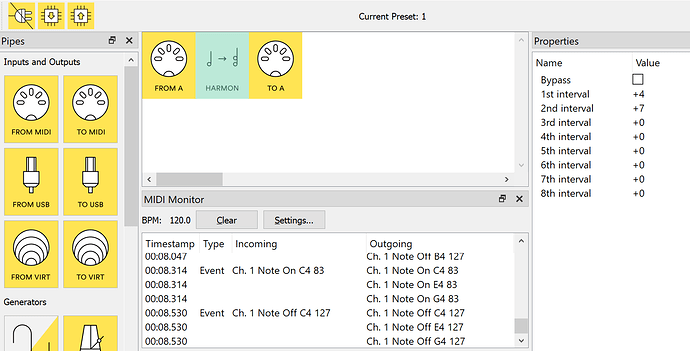 The MIDI Monitor shows all the data being processed and produced by the currently selected pipe, as well as provides a BPM estimate based on the recent Clock events. Filters can be set up to hide irrelevant events.

This is great news!!

Installed Windows version of the Editor. Can’t connect to my MidiHub which is of course running an older FW.

Is there a way to flash the new FW to the Hub without the Editor?

Make sure to save your presets to files for later re-import.

edit: Ok, this version is now publicly published and below info is no longer relevant.

Ah, it’s because we haven’t published the update publicly just yet - it does not know where to get the new firmware from.

We’ll probably have to publish new builds to take account of that.

In the mean time, you could follow this update sequence:

This is fantastic news

There’s a confirmed issue with importing memory backups into Midihub, we’ll get it fixed soon. If you’ve encountered the issue, please send me the .mhd file via PM and I should be able to recover it for you.

The firmware auto-update process works ok to move the memory contents to the new version.

All the downloads on the site still point to the 1.11.10 version even though at the bottom of the Download box it says 1.12.0

What a great improvement on an outstanding piece of gear…

Brrrrwwwwaaaaaghghgh!! Thanks guys. This is awesome. I’m 100% certain this will make things so much easier for me. Cant wait to get stuck in this evening.

And I LOVE that the monitor pane can be popped out to a separate window. Put on my second monitor and not sacrifice any screen real estate for pipelines and properties.

Great news, hope I can update that on my RPI too.
(but I am a little disapointed that there is still no chance to simply name the ports…)

Hi, the online update did not work (it never did so far in my Ubuntu). But neither works the link above Downloads - Blokas
it says “Oops!”

Hey, what error do you get when attempting the online upgrade?

What is the Ubuntu version you’re using?

With a simple patch installed to test the monitor USB A/B/C/D to OUTPUT A/B/C/D driven by 4 different clips from Ableton via USB - nothing appears on the monitor. In fact fiddling around for a couple of hours nothing has ever appeared on the monitor. Selected it on / off many times.

Check midi filtering for the monitor.

Do you have it working with MIDI-DIN inputs?

Hi - many thanks - I selected within the settings of the midi monitor, all off for both input and output and it worked. Even though they were all off anyway?

And yes didn’t get input monitoring initially, my default position, which I hadn’t tried until you suggested it - when above applied, all fine!