Hey guys! Here’s an update to Midihub and the Editor - it brings macOS M1 support as well as many fixes for the UI and the high DPI displays, some bug fixes and improvements to Midihub’s pipes, including Pitch Shift parameter for Delay pipe, revamped Equalizer pipe so it can apply curves to many more kinds of messages, Base Note & Frequency for Micro Scale pipe, and more. There’s also some usability improvements in the UI like better messaging when overwriting another preset slot, or when the Editor is not connected to Midihub. The Editor will now produce telemetry data so we know how well it performs and which areas we should focus on. A What’s New dialog was added to the Editor so from now on it will provide more details on the new versions and provide smoother upgrade experience for both firmware and Editor software. 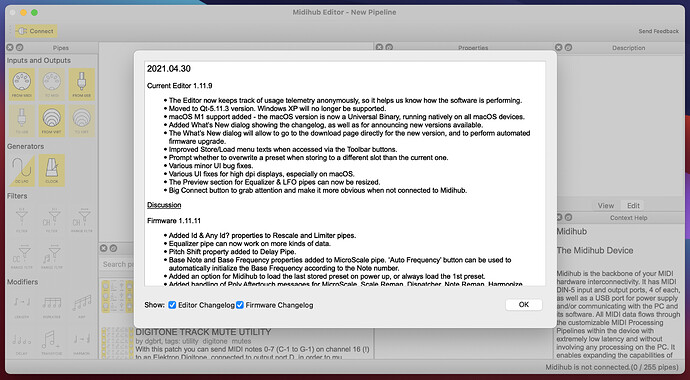 First make sure to install the 1.11.8 editor. Then on connecting to the device, if there’s an update available you’ll be offered to start the upgrade procedure. Confirming it will then go on to download the new firmware image, save a backup of the current memory contents to disk, do the flash procedure and restore the backup back into memory.

Otherwise, you may also do Help->Check for Updates Now... while connected to Midihub to start the automatic upgrade procedure.

Download firmware image linked above, and do Device->Flash Firmware while Midihub is in regular mode. It will also backup and restore the memory data automatically.

Note: Starting firmware upgrade when Midihub is in bootloader mode will not save the memory contents, just in case, there’s a warning message when doing that to remind of this.

What would be great is see the repeater and other time division based functions having more imaginative division possibilities for tuplets and nested tuplets rather than the just middle of the road 8ths, 16ths, triplets. It seems almost a contradiction not having more experimental features on something that supposedly is for experimental purposes.

Just stopped by to say that the new update process is much better than the old way. It’s very easy to update the editor and the firmware now. Thanks.

Can´t make it work on my RPI Zero W: Don´t know which Linux File to take and how to make it executable

Use Linux ARM (AppImage). Run these commands in a terminal:

Afterwards, you should be able to simply double-click the file in your Home folder to run the editor.

thx for that link, it downloads the app but I cant run it by double-click. In a previous version you made a launcher to make it work on RPI

The previous issue is already fixed. What happens when you double click the application? Did the chmod command succeed?

I do a right click on the file, then “open with” and then type in the custom command line “chmod +x” and I see an hourglass but it does not open (same with simple “chmod”)

You have to type in the commands I listed into a terminal. Or double click/open the program, and ask the OS to execute the file itself.

After you successfully perform the chmod command in a terminal, doubleclicking the AppImage file should then show this dialog:

I have a downloaded file in my home directory which shows this window when I double-click.

I did “chmod +x MidihubEditor-arm_1.11.10.AppImage” in terminal, when I click execute nothing happens.

it would be so nice to make it work, otherwise I must always switch to edit my RPI USB Patch and my according Midihub Edit.
where do I wrong?

(P.S. It is still not possible to edit the portnames?)

Sorry about that, it turned out that there indeed was an issue with the ARM build of the Editor, on Pi Zero devices. I’ve fixed the issue, please download the new AppImage from here:

And run the chmod command on it again.