Given the similarity in the hardware interface and that both are linux, will the pisound work with an asus Tinker?

Hey, the Asus Tinker board is using a different kind of processor - the current driver is meant for the Broadcom processors used by Raspberry Pi. Unfortunately we don’t have the resources to port the driver to other platforms.The code is open source however, so in theory someone could take up porting it.

thanks for the reply Giedrius.

Hey, the Asus Tinker board is using a different kind of processor - the current driver is meant for the Broadcom processors used by Raspberry Pi. Unfortunately we don’t have the resources to port the driver to other platforms.The code is open source however, so in theory someone could take up porting it.

could you expand on this a little bit…what do you think might be involved?

so the Tinkerboard header is physically the same, and ‘compatible’, (ie. voltage/gnd, and important pin usage), but some of the GPIO pins are used different in a few ways, mainly due to extra features e.g. 2nd spi bus.

is the main effort, reviewing the GPIO pins used, and converting to those available on the Tinkerboard?
a quick browse of the pisound kernel source seems to indicate its SPI, and i guess we’d need to review the GPIO used for ‘the button’.

(changes need to be made to both pisound.c and dts file)

The important source files are:

The first one adds customizations to RPi’s base dts file (also follow the #includes mentioning bcm), so it may need significant changes for the Tinkerboard. It defines some CPU peripheral and gpio pin configurations for Pisound.

The 2nd one is the kernel module, it’s fairly generic and based on ALSA’s SOC subsystem, the stuff in ‘pisnd_dai’ may have to be reconfigured for Tinkerboard, as it is referring to some BCM names, the rest should work as is if the dts is sorted out.

thanks, yeah I was vague about dts as its something i only have ‘passing familiarity’ with.

however, my assumption is that if I take a look at an overlay for the tinkerboard, the changes will be fairly clear … i don’t think your doing anything particularly unusual in your dts?!
(configuring for SPI mainly , no?)

a quick search on google, actually came up with a thread discussing how to convert dts’s from rPI to tinkerboard, and looks pretty straightforward

this includes some hints, and also a fully converted dts 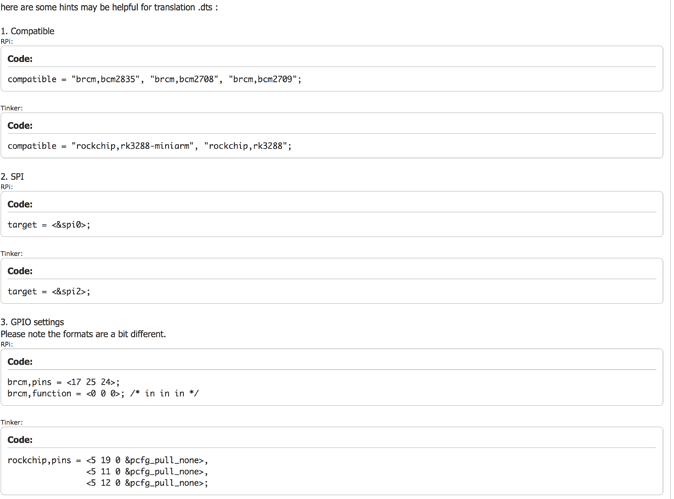 hmm, perhaps i’ll get my tinkerboard updated, and see how far i can get

(so many projects so little time

Hi @thetechnobear - did you manage any amount of success with the Tinkerboard?
I’d love to use mine with my project but don’t know where to get started just yet

Hello @thetechnobear , I’m from the Axoloti board as well! Did you ever get a chance to try Pisound out with the Asus Tinker board? Any luck?

Hello @thetechnobear , I’m from the Axoloti board as well! Did you ever get a chance to try Pisound out with the Asus Tinker board? Any luck?

sorry, not yet … so many things to try, and little time…

i did buy another pisound though, so that would allow me to try on the tinkerboard whilst keep the other for day to day use. (that said, I popped the spare straight onto another rPI which was probably a mistake

I’ll admit Ive got/had a bit of an ‘inertia’ problem with the Tinkerboard.
I bought it when it was first released, and the kernel source code wasn’t available which was required for the project i had planned for it, so i put it back in the box.
then every now and again, I go back and look to see , what is the current state of play, and to be honest, its always looked a bit ‘confused’, which distribution to use, and for each which features works and don’t.

What I probably need to do is find another sdcard (the one i original used got ‘repurposed’) and chuck the latest tinkerOS on it, and see if I can get the kernel built… if that works, then Id be more likely to start trying things like pisound on it

(its why I left the notes above, so I can pick it up, when I got over this interim hump !)

Thanks Mark, I really appreciate the quick response. It’s great that you included your notes above and @Giedrius chimed in, too. For my project, I need to get Pisound working with a board that has USB 3.0, ideally. I’m looking at Libre Computers Renegade as it shares the same for factor as the RPi. I’m a much stronger programmer than electrical engineer so I’d sooner jump this hurdle with code, if possible. I’ll going to prototype with the RPi and scale up to the Renegade if everything goes smoothly. Your notes will be really useful when that time comes as at least I’ll know where to start.

Thanks @everyone for your input! I got Pisound working with Tinker Board S, see here for details: Pisound on Tinker Board!