Hello There Midihub Community and above all developers!

We both use the midihub extensively and the presets can quickly become quite overwhelming to look at. Several chains are present for single pieces of hardware (effects, synths and drum machines) and to put it simply, its a mess to look at when you’re running a bunch of different tasks through the Midihub in one single preset. A folder system for the programmer would be cool, just for the overview of the whole thing - the ability to group a number of pipelines, give them a name and be able to open and close those folders… I personally try to keep track of my midihub setup with pen and paper, but it would be sooo nice having a filing // categorising // sorting system for the thing. Would spare me a few very minor headaches.

another thing, though small still nice - velocity filtering. I know you can work around it with the transform pipe but… would be nice to have one simple pipe performing that task!

Beyond that, we have immense gratitude for the Midihub - its a creative revolution in a highly midi implemented studio setting.

best from Simon and Niels

You mean a lot more than this… 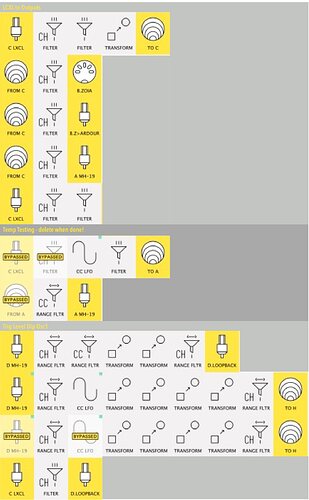 I’m not sure whether, by “folder system”, you mean within a patch…
…so a bit like my image with “disclosure” tabs so you could “collapse” a section

or whether you mean across patches so you could go to an “organiser” and preview “patch components” (that organised people might have) on the computer to preview and drop in like an in-house patchstorage? (by ‘preview’ I mean Mac-style Preview; ie. just scroll through – maybe with tags to narrow search– without having to click Append from File on each one!)

I think you mean the former; just wanna know what I’m upvoting!

PS. velocity filtering means like a cross between Filter (but for values not ids) and Rescale (but exclude don’t clamp) right? You mention Transform ; would adding Null to the Into Property do the trick?

@resonotter : " I’m not sure whether, by “folder system”, you mean within a patch…
…so a bit like my image with “disclosure” tabs so you could “collapse” a section"

Exactly this! but your suggestion from the attached image would be a smaller but still big improvement to the same problem… if not it would actually just solve it completely, though a “section collapse” option would be amazing!

The latter part of your answer was not what i meant, while interesting to have that implemented, it would not be essential to me.

Velocity filter for values and rescaling yes! In Transform you could add Null to the Into, but so far i used a suggestion i found somewhere in here using “Active sense” and then i’m filtering out the active sense message afterwards…