Are we getting more LV2 plugins through the MOD Devices pipeline?

The company launched a crowdfunding campaign for MOD Dwarf, which sounds like it might have more plugins than previously… and a more direct way to create new effects. Maybe I’m misunderstanding. The processor is between the MOD Duo and the MOD Duo X. It has some advantages over the MOD Duo, including USB I/O (audio+MIDI). They make it sound like the USB connection also makes it easy to install plugins and control patches.

So, I’m not sure if it means anything for MODEP. After all, if they’re releasing more LV2 plugins, those probably work in MOD Duo X and probably MOD Duo, already. Maybe some of them don’t work on the Pi (I’ve had issues compiling some of them, two years ago, because some hardware support was missing).

At any rate, it’s still an interesting campaign for those of us who use MODEP for MOD-like fun…

MODEP pretty much includes all the open source plugins that have modguis that are out there. They have a web store for plugins as well where they probably offer some closed source plugins, but MODEP can’t access it, as it does not have any valid API key.

If you know of more open source plugins with GUIs that are missing from MODEP, then let us know.

I have a modduo and modep on a rpi4 and copied lv2 files from the modduo to my modep work fine.

That’s really good to know! Don’t think it was the case with the Pi3. Haven’t used my Pisound with Pi4, yet.

Yup Lv2 from modduo worked on modep with my Pi3 too. Now i use on 4 and work too… The thing that missing on modep is the ability to map Snapshots or rotate options with a midi controler.

Interesting, they mention that it will be shipping with the Looperlative 2 Track Stereo Looper. Which is great because I just asked about an hour ago (Anyone seen a Stereo Looper?). 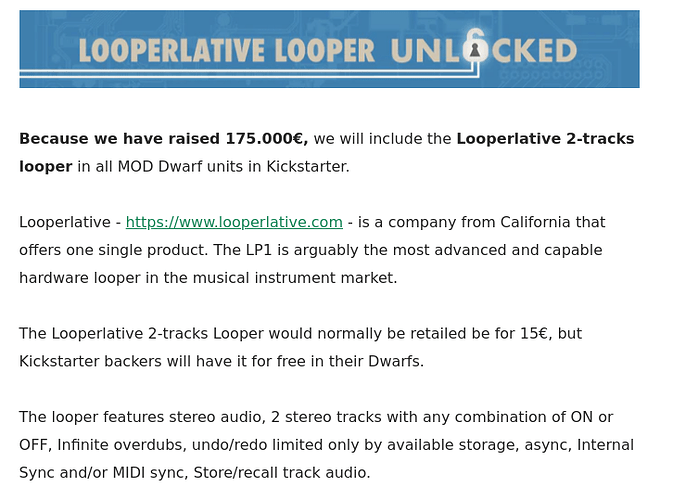 I am having a hard time finding out how to see if I can buy it and put it on MODEP though. 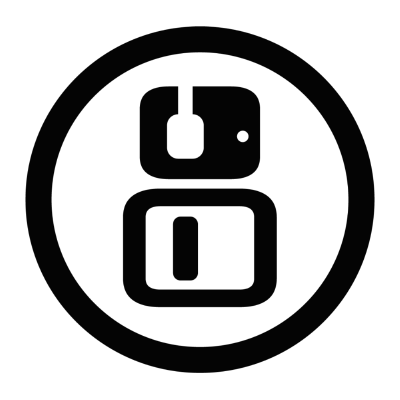 The MOD Dwarf lets you used 400+ free and commercial plugins, which can be patched using a browser-based visual interface that lets you split, join and feedback signals in a modular fashion.

So are you going to see have you can get them to work with Modep if i read the first post right?

As a “community”, we could always try…

You can set up mod-plug-in-builder on Ubuntu 18.04(don’t use newer, it won’t work) and then build the new lv2 for modduo. Be warned that a lot of them require mod 1.10 and up to work…

Both pieces of information are very useful!
A lot of Open Source work is about versions. Especially with Linux distress. Using the LTS version of Ubuntu, setting up MOD Plugin Builder, and making sure we’re using a recent version of mod.
Not completely sure what you mean about this last part (that building those LV2 require “mod 1.10”). Is it MPB 1.10? Not finding release numbers, though falkTX did mention 1.10 in February: https://github.com/moddevices/mod-plugin-builder/pull/104

Might actually go the Docker route. How To Use Docker Toolbox With MPB - MOD Wiki
Guessing it’ll be faster to build those on my M1 Mac than doing it on the Pi or on my Ubuntu laptop.

So modep is Mod 1.8, but the mod dwarf is running mod 1.11 already. Biggest change is the file handling which gives us IR cab sim and IR reverb. There are also some Neural net based drive pedals, like the chow centaur that sounds amazing!! If you’re keen to try mod 1.10, I have a script on my GitHub. https://github.com/micahvdm/mod

Hey thanks for sharing this steps . I managed to get it working on 64 bit , just missing the lv2 effects , will check later why that is

Speaking of MOD Dwarf…
This elaborate review gives me some ideas… 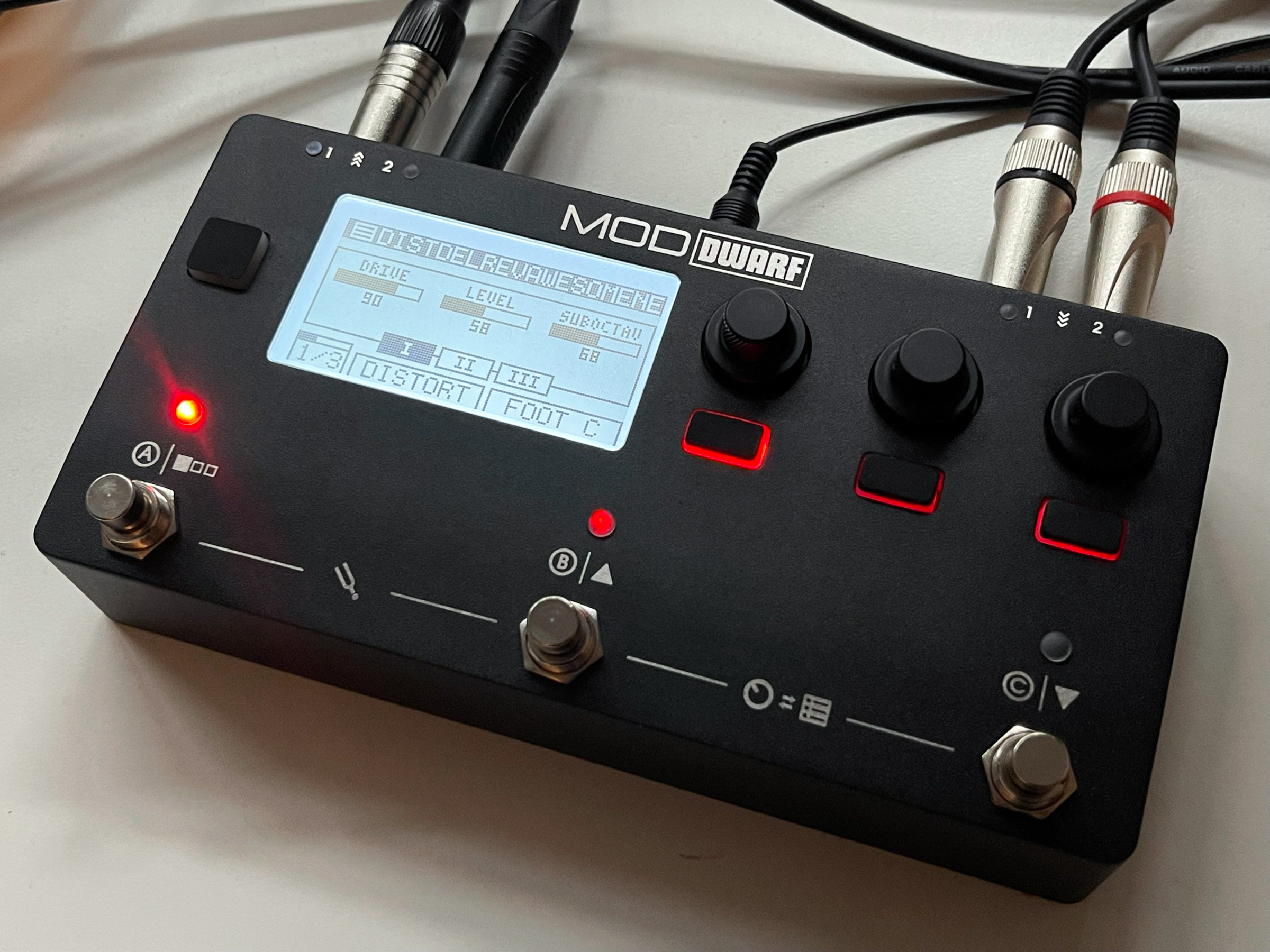 Review: MOD Dwarf is a lush, bottomless portal to effects that keeps getting...

If you love software, if you love the imaginative and compositional choices it affords, at last hardware is embodying that same freedom. Few devices do that more elegantly than the MOD Dwarf.

During the week, I did use MOD Plugin Builder (in Docker on my Mac) to compile a bunch of LV2 binaries which aren’t in the usual distribution of MODEP in PatchboxOS. I then copied those to my Pi and tried a few of them.
Sounds like things haven’t changed much on that front in the past few years. Some plugins work well, others don’t load. And, as discussed on occasion, there are issues with saving presets or snapshots.

As @deathbeard said, the MOD Dwardf uses a different version of the whole setup. Thanks for that screenshot, @DrKoma. Makes me realize that there are new features in the interface and those could be useful, including the “Manage CV Ports” part.

@Enkerli Its actually a super smooth version , runs much better in terms of UX and other things I guess .

I fiddled with it a bit and could get plugins displayed but only with a LOCAL red tag , and when dragging them into play they wont load . But dont consider this since it wasnt tested on Patchbox but on Raspberry OS 64 bit on a Pi 8 Gb ram with Pisound

I tried with building from sources a few lv2 and they do display but looking at the mod-host I can see "Plugin could not load " or similar . I tried in interactive mode with verbose but it did not make such a difference in output .

"Plugin could not load "

Did you check the journalctl -u modep-mod-host -f when adding the plugin? Usually it’s some missing runtime dependency like some .so library. You may try running:

to see what libs it tries to load, and it might indicate missing ones too.

If you’re using aarch64 then you’ll need to build for modduox as it is 64bit. I am running mod 1.10 on patchbox with pi-stomp and it works great! You can only build modduo if you are running arm-v7 aka patchbox

Thanks , this 2 commands are useful . However , everything looks correct ? aarch64 etc , journal just reports “cant get plugin” wich is not much information to dig furher