Is this possible: Take pitch from 1st and note on/off from 2nd midi channel?

I’m looking for the following functionality and was wondering if this is achievable with the Midihub: I’d like to use two tracks on my sequencer to sequence my synth. The first channel should set the pitch of the note/chord and the second should set the note on/off command. So I could have a 16 bar loop on the first channel to set the pitch of the baseline and a 1 bar loop on the second channel to set the rhythm of the baseline. Is this possible? If not, could this be added as a feature request? Maybe one solution would be to have the option on the arpeggiator to take the pitch from a separate channel than the trigger.

@sir-vector what I said earlier is strictly true, but not the whole picture!

It strikes me that a Note Remap pipe might do what you want if you map the OutLow & OutHigh to the value you want. (at least with a monophonic sequence where the tone is “set” prior to when the NoteOn)

What do you mean when you say

first channel should set the pitch of the note/chord

is that a note you’re sending or a cc? Wouldn’t a chord have more than one pitch simultaneously?
Or are we talking transposing here?

Thanks for the reply!

So I guess the whole thing could be solved with having the option in the arpeggiator to trigger the notes from an external source (instead of continuous 16th/8th/etc. notes).

Unfortunately, I think that’s gonna be a “No” if/when one of the Blokas folk reply:

I see the Midihub as (an excellent) “1in/many out” device which more or less deals with what event has just come in. It doesn’t have any buffer or state-persistence beyond what you see in Repeat, Delay, Arpeggiator.

having the option in the arpeggiator to trigger…

…as well as external trigger you also want control over the sequence too, I guess (rather than be restricted to Midihub’s 13 arp types).

I dunno if Blokas is planning anything like this (sounds a bit like Midihub MkII to me!).
In the meantime, I would probably scripting something in python using the .mido module (or isobar to make something more generative). All very nice but not as playful as Midihub and ties you to a computer…
(another user might have a better solution)

It strikes me that a Note Remap pipe might do what you want if you map the OutLow & OutHigh to the value you want. (at least with a monophonic sequence where the tone is “set” prior to when the NoteOn)

@sir-vector
Is this worth trying just to see whether it produces any interesting results?
The notion would be something like this:

Let me know if this doesn’t make sense!

Actually I would be fine with the existing arp types as long as I can trigger them from a separate midi channel. The more I think about it, the more sense it would make to implement an external trigger functionality, as the arp already employs a similar „buffer“ concept and also provides additional functionality with the octave setting and arp types.

@Giedrius hope this is feasible to implement and can be added quickly to one of the next updates (fingers crossed)!

Actually you can already trigger Arp steps using a Sync Delay with a negative value to produce the required amounts of Clock messages at your leisure.

(6 clock messages is equivalent to a 16th note) 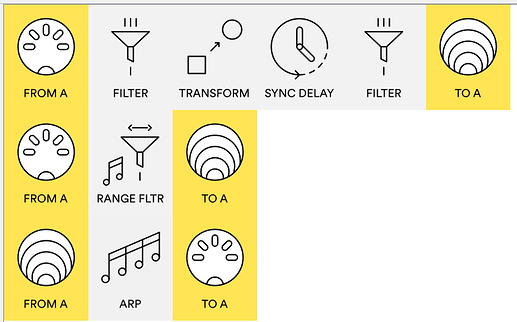 This preset is triggered by the Middle C key (note 60), note on & off messages, but you may adapt the first line to trigger on whatever you’d like to, it should simply make sure to send a Start message into the Sync Delay pipe.

The 2nd line simply drops the Middle C note out of the stream, so it won’t interfere with the ARP pipe.

The Arp is set up in a way that it reacts to your trigger notes lengths.

Send a Start message directly to the Arp pipe to resync it, so that the next trigger signal is the one that plays a note.

Maybe this somewhat achieves what you’re after ?