Sustain pipe not working as expected

I simply add sustain pipe between midi keyboard and sound device and map “Sustain On” to my susatin pedal (connected to my midi keyboard). 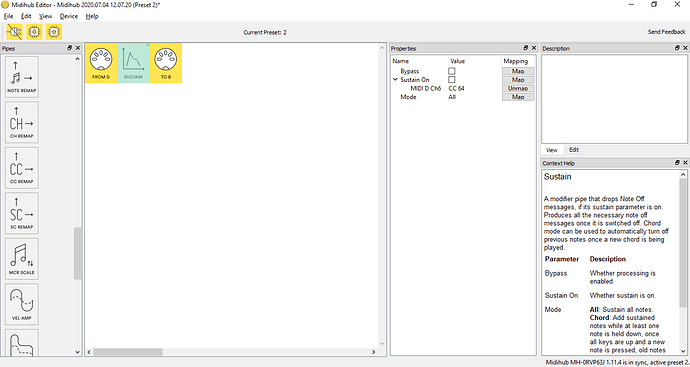 Notes are still sustained. I have to replay the same notes to send “Notes Off”.

Am I doing something wrong ?
Have you experienced the same ?

Do you see the Sustain On parameter change when you operate your sustain pedal?

The mapping of “Sustain On” seems to be correct.

So I tested a bit further this morning and it works better now.

I use a Roland Juno Alpha as a midi controller and The Juno sends CC123 (Panic) when all the keys are released. I don’t know exactly why, but I put a filter pipe that filters everything but Notes On/ Notes Off before the sutain pipe and it is working now.

That being said, The behaviour of the sustain pipe is a bit strange.
I expected the same behaviour than a classical synth, for example :

–> The note on the right hand should be maintained but it’s not, 4 Notes Off are sent by the sustain pipe (verified with MidiOx) although the keyboard controller only sent 3 Notes Off.

Another example is when I play 2 chords consecutively with common notes, for example :

–> I expect that the second chord is still maintained but it’s not.

Interesting, yes, the all notes off / panic turns off all of the notes, regardless of sustain status.

I see what you mean regarding the sustain behavior, we’ll note this down to be improved in a future update.

I use a Roland Juno Alpha as a midi controller and The Juno sends CC123 (Panic) when all the keys are released. I don’t know exactly why, but I put a filter pipe that filters everything but Notes On/ Notes Off before the sutain pipe and it is working now.

Thank you very much for your very important discovery! I had the same problem. I use a Kawai K1 as a master MIDI keyboard, and the sustain pipe also did not work as excepted. But with a general filter pipe (which filters out all data except note on and note off) after MIDI input the sustain pipe works splendid.

Has anyone found any workarounds for the issue of all MIDI notes being turned off when the sustain pedal is released? Maybe there would be some kind of way to use the pedal’s CC data to simply delay MIDI note off messages until the pedal is released so that it actually works like a sustain pedal, but I can’t think of any ways to do that.

No workaround for me either.
I was expecting an update to fix this but I guess it’s not that easy

Any progress on fixing this issue? I’m considering buying a Volca FM 2, but only if I can use a sustain pedal with it!