I’ve just tried to setup Patchbox for the first time and have run into some issues that I have no idea how to solve. First off, I don’t think my wifi dongle is being recognised by the OS so I’m having to use an ethernet cable. The systemctrl status command says “running” if that’s any indication.
Secondly, and more importantly, when I try to set up MODEP, it simply won’t work. I’ll attach a screengrab of the terminal response I’m getting. Jack seems to be running fine with my old FastTrackPro so presumably it’s not related to that. 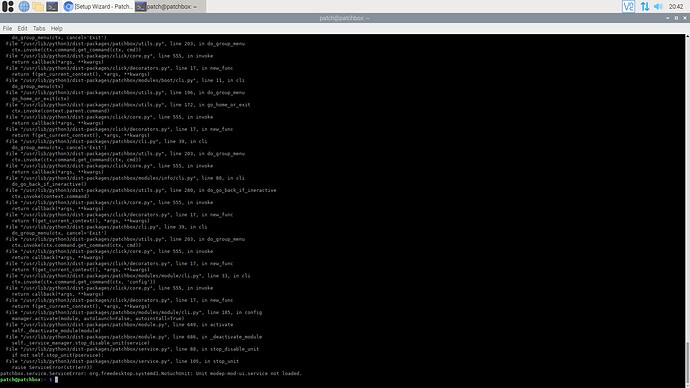 Maybe the installation of MODEP failed for some reason - try installing it manually by running:

And then enabling the module via patchbox.

Thanks for your reply. I actually ended up reflashing my disk and installing from scratch. This time MODEP appeared to install properly (it certainly downloaded all the plugins) but it still won’t run at bootup and I stll can’t find it anywhere on the desktop when I go into that. The other modules are there but I’m only interested in MODEP! I select it as the module I want but when I reboot, I just get dumped at the command prompt or go into the desktop.

Also, the Wifi still won’t work. During the initial installation it displayed:
“Failed to start Advanced IEEE802.11 AP and IEEE802.1X/WPA/WPA2/EAP Authenticator” which I assume is relevant? (It’s a bit odd as the Wifi dongle works perfectly alright in the same RPi under MotioneyeOS.)

Frankly, after hours wasted on this I’m beginning to suspect Patchbox just isn’t compatible with my limited RPi 2B, despite the website saying it is.

Do you intend to host a hotspot or connect to a WiFi network? If the former, is your WiFi dongle access point capable?

What is the output of these commands:

There’s supposed to be no UI on the Raspberry Pi itself (unless you open a browser and go to http://localhost), it’s best to access it using an external device like your laptop or tablet, see the documentation: Running MODEP - MODEP Documentation

Well, yes that’s what I was intending to - control it via my phone or ipad over my home Wifi, like I do when the same RPi is running MotioneyeOS. I don’t understand why Patchbox is having a problem with the hardware.
I didn’t realise MODEP was ONLY accessible with a browser though. In my ignorance, I just assumed it’d come up with a UI on the RPi itself. I’ll try again later - thanks again for your help.

nice to be able to access it on my ipad! The sound quality isn’t great though

surprising when RAM & CPU are below 30% and the Jack settings are as low as practical for guitar fx (44.1/512/3). My FastTrackPro will work better & faster than that so I guess it’s just the RPi 2 architecture?
Never mind, what with the the wifi not working too, I think I’ll just try and find a desktop version of MODEP. Plugging those cables in can be a bit finicky on a touchscreen anyway!

**Maybe a note on the Desktop about how MODEP doesn’t have its own UI (and has to be launched in a browser) would help any future newbies wondering why they don’t see it alongside the other modules there? Us muso’s don’t always read all the docs - we tend to plunge in and expect stuff to be like Windows/Mac!