Are there already pipes for those protocols?

Nothing specific at the moment, see this thread for related discussion: Extra Transform options (NRPN/SysEx)?

Please let us know what kind of pipes would you like to see for MMC and MTC?

I have a pyramid in the center of the studio but this device only understands Midi Clock without SPP. I also have a HD24 recorder that sends MTC and understands MMC. My old MPC 2000 can handle this and works perfectly, but not the pyramid. I would like to use my MidiHub so that it converts the MTC signal from the HD24 to Midi Clock for the pyramid and translates the Midi Clock Start/Stop from the pyramid to MMC for the HD 24.

In other words, I want to keep my HD24 in sync with the rest of the sequenced equipment without striping my HD.

This is no straightforward “replace MIDI message X with Y” conversion.

The MTC is a stopwatch, MIDI clock is a metronome and converting former to latter requires knowing the target BPM to begin with, and to support tempo changes, it needs a tempo map. The two protocols also run at different wire speeds, requiring the converter to sync-lock to the incoming signal on its own which takes non-zero time (ie needs a pre-roll), and then you want some time to allow the MIDI clock to catch sync before actually starting play, so its’ a bit of a rubberband in the middle. I’m not necessarily saying it can’t be done, but considering no such thing seems to exist in the wild (judging by Google hits), it’s no mean feat.

The MidiHub can act as a MIDI clock master already, so it could quite reasonably act as an MTC master as well. Ie, be a general purpose MIDI master clock device.

If the HD24 doesn’t support slaving to MTC, that doesn’t help your case but it would be a genuinely useful thing to have. The MH is expected to sit at the crossroads of all the devices which is the perfect position for a clock master.

My own case is quite similar: my Fostex D2424LV can be an MTC master or slave, or a MIDI clock master so I can sync Pyramid to it, but that does mean I need to program the tempo on both the Pyramid and the D2424 (as I don’t want the D2424 spinning for nothing while working on the song structure), which can be quite a PITA with complex songs. Not that I’m complaining, at least I can sync the two. Anyway, If the MidiHub could be clock master for both, I could program it all just once on Pyramid (with CC messages to control MidiHub BPM). Or so the theory goes

Yes, I know the differents protocols. Anyways it seems that integration of recorders is not on the priority list. I ordered an used BRC for the HD24, that understands all of them in any direction and seems to become my new center of the studio (at least that is what I hope that it will do, not yet arrived here). I know that there are possible solutions, but they all are a compromise and not easy to handle. Again, I would really like to see those functions within my pyramid, but hey… hope dies last (btw even my mixer sends and recives MTC/MMC/SMPTE, but no clock).

I just picked up a midihub and was hoping it’d help me syncing my alesis hd24 recorder too. Just seeing this post now. Fingers crossed something gets implemented in the future. Nice to know that the mpc2000 will play nice with the hd24, might have to look to picking one up eventually. 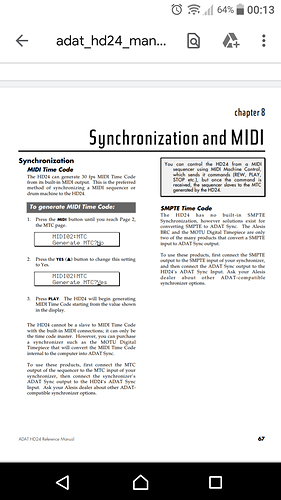 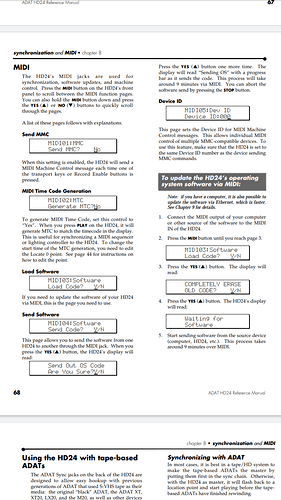 Attached screenshot 2 of 2 of how the Alesis recorder deals with midi for anyone’s info.