Midihub + Elektron Devices (and others)

I just received my Midihub and I am super exited! I managed to use the device as Midi Clock using my Octatrack on Input A and syncing the other devices Analog Four MK2 and Analog Rytm MK2 using the midi outputs. The Octatrack (OT) also has a midi sequencer and usually I use it to generate a baseline on my Moog Slim Phatty (SP). Obviously this is not possible using the simple setup from above. I am sending no note indication from the OT to the SP. Can someone please explain to me how to set the Midihub up so that all my devices are in sync + the OT sending the midi notes to the OT? In the end I would like to go Dawless. How to setup the OT as master clock, sync everything ans still be able to send midi data to the OT? Thank you!

Hey, could you show us the preset you have so far?

On which input and output letters on Midihub are the devices connected to?

Hi! Its somehow working now using Input A (OT) sending everything to OUT A,B,C,D

My next question would be how to set this up so that I can send only MIDI note date to the SP while also sending midi clock and transport data (to change the tracks and presets on all Elektron devices at the same time). Anybody using a similar setup? Thank you!

You have to use filters and virtual buses for it, something like this:

assuming MIDI A output is connect to SP input. Then the Virtual A bus will carry all of the tempo data, while the notes data will be forwarded only to SP.

Thank you, I will try that! Will this also solve the problem that I have to enable “Transport” + “Clock” on my OT in order to send sufficient Data to Start and Stop my Elektron devices?

The “Transport” refers to the start, stop, continue actions. The “Clock” is just the sync message to keep the devices ‘moving forward in time’.

Each device synced to the main unit have their own transport state - they’re either playing, or paused. So what you normally want is to send the Transport messages from your main sync unit to all the rest of the devices, so they all start playing at the same time.

Btw, in the tempo bus (Virtual A), you should keep the ‘song position pointer’ messages too, as they indicate the position in the pattern. Not sure if OT will send those, but it could help keeping it there.

So I followed your advice and now only the SP gets note signals. The A4 and the AR won’t start at all. Everything works perfectly with my initial setup:Input A (OT) sending everything to OUT A,B,C,D. 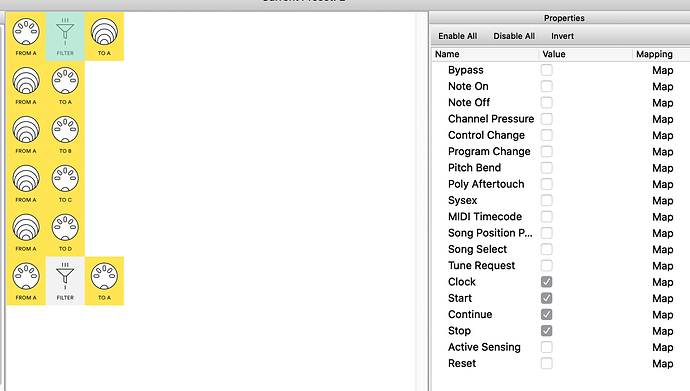 If a box is ticked, the Filter pipe is set to drop those kinds of messages, so the devices get everything but Clock, Start, Continue and Stop in the screenshot.

No reason to reel stupid, I think it is most natural to assume a ticked box to activate something! Only second glance reveals that it says „yes“ to „no“

I am sure you are neither first nor last to go into this trap - I certainly did as well:-)

Yes, this has happened to me as well…

The idea is to tick the types of messages to filter out, so that’s why it’s dropping the ticked messages.

Probably having the reverse operation could be occasionally as confusing as well.