So after many weeks of waiting, a failed unit, a newly shipped replacement, I finally got a working MH to play with. Sadly, its been a bit underwhelming so far. So many things I expected to be able to do easily have so far failed.

I see a lot of photos of users with MH in a DAW setup. This seems redundant to me as anything I can do with MH I can already do with Cubase. Are there many users with DAWless set ups out there? Can you share wins and fails and how you best implemented MH in your rig?

Most of my frustration stems from clock and sync. I have 2 Beatsteps and a Keystep I want to slave to an AKIA XR20. Start, stop, tempo - nothing out of the ordinary. After 24 hours of experimenting this has proven impossible to do. Using the built-in example pipeline MIDI Tempo Sync.mhp and Beat Clock even they dont work.

I am using the free utility MIDIpatchbay to map Beatstep 1 to USB Port A, Beatstep 2 to USB Port B and Keystep to USB Port 3. I can patch USB ports to software synths no problem so the signal is getting routed. I can set up a patch in MIDIpatchbay to send clock from the Keystep to the 2 Beatsteps and it works flawlessly. Start, stop, tempo all perfectly in sync. So it can be done. The devices can be used this way. So its not that. Its tha manner MH processes and passes on the signal to the corresponding USB ports.

Midi Delay does not work as described. For me there is no volume/velocity falloff. All echo notes are the same intensity.

I have enjoyed making thick chords from single notes and using the chance and random pipes. There is a lot of potential here and my understanding is limited based on the short time I’ve had to play with it. Just a little frustrating not to be able to do the ONE THING I bought this device to do.

Looking forward to some ideas for your setups.
Cheers
Adam

Hey, I’m pretty sure all of this can be made to work as you expect. Could you share the preset you have so far to get the devices synced up?

Btw, I’d recommend using DIN-5 MIDI connections as much as possible with external devices that support it - the clock signal will have less jitter compared to the limitations of USB connection.

Midi Delay does not work as described. For me there is no volume/velocity falloff. All echo notes are the same intensity.

Did you set the Feedback parameter between 0% and 100%? The lower it is, the quicker the falloff.

I have enjoyed making thick chords from single notes and using the chance and random pipes. There is a lot of potential here and my understanding is limited based on the short time I’ve had to play with it. Just a little frustrating not to be able to do the ONE THING I bought this device to do.

and you’re in “good hands”.

Clock and sync is always a “tricky affair”, careful planning (Master/slaves) going thru all settings on all devices, make sure it’s correct.

+1 with Keyman. It took me a while to wrap my head around how the pipes work and the direction you want the midi information to travel. But once I understood the layout, routing those signals got a lot easier. I have an elaborate setup with the MH as the main midi clock distributor and timing wise, everything is pretty tight.

After another night of experiments and explorations the routing is working. I didnt change anything, just shutting everything down and turning it all back on seemed to do the trick. Nice. Great to have the Beatsteps synced to the Keystep to play measures with different meter and count. Add the Chance pipe and it makes for a great deal of variety from a 16 step sequencer.

However I still cannot get Repeat or Delay to work in my pipelines. It doesnt say so explicitly in the documentation but does the synth need to be velocity sensitive? The Delay reduces the velocity of the repeats so if the synth is not velocity sensitive I imagine that would not work? I will need to study the docs of my synths and explore. Delay Repeat on the other hand do not produce any repeats in certain situations. Seems just random, sometimes it works sometimes it wont.

See the screen grab or the preset file attached for my very basic set up. 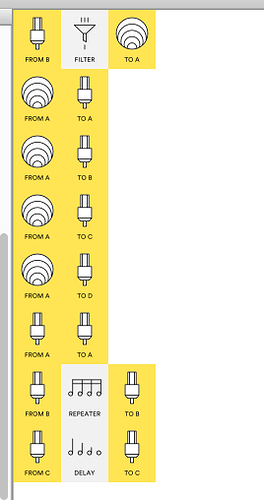 Hey Chris, would you mind sharing a screengrab of your pipeline for using MH as the clock master? I like that idea. I was playing around with mapping an encoder to the tempo property and it seems to work really well. Do you have a way to get any kind of visual readout of tempo? My plan is to use my AKAI MPC as the master as it has an LCD screen that I can enter very precise tempo visually. Just turning a dial is a lot of guess work. How do you tackle that issue?

Cheers for the comment/reply
Adam

The breakdown of my pipeline goes like this (brace yourself lol):

I’ll add a screenshot of the entire pipeline; I don’t think I missed anything but you never know! 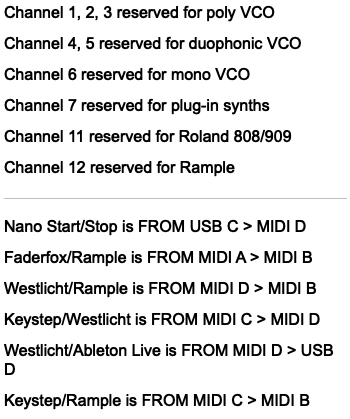 This was a lot of trial and error with plenty of help from Giedrius and the Blokas crew. I really understood how these pipes work by trial and error.

As for a visual display of tempo, when used with Live it’s obvious. If I have my MacBook clamshell closed the Performer has a tempo display as well. When I go stand-alone, with the Keystep as the clock source, i use its display.

Thanks for sharing that setup. Man thats a lot of pipe work. Must have been a lot of work to get to that level. Do you map any/many of those settings to controllers?

I still havent had a whole lot of time to explore too much but I did finally get the delay pipe to do what I want. And got a bit better understanding how the clock divisions work between the Beatstep and the MIDIhub

3/4 of that pipe was built myself, while the last portion of it was from a Loopop pipe he made for his Midihub video so I’ll take most of the credit lol!

I do have some params mapped out to a controller, and they’re mapped to a Faderfox EC4. They can be pricey but the fact you can jump between groups and pages quickly, with display names for the mappings params, it makes the Midihub a performance tool especially when DAWless.

If you look closely at the images, there’s a little green dot on the top right of the pipe cells. That means the parameters in that cell are mapped. There’s quite a few!