so is there a way to morph between states?
I see that there are presets you can switch between

I’d like to have two states where a button press can switch which state is in focus. Then use the CC sliders to set your state and press the focus button to switch to the state B to set it too.
then something like an LFO or another CC could interpolate between the two states

The note trigger suggestion would let you generate Euclidean polyrhythms, which would be very cool!

CC morphing is a good idea, but unfortunately the MIDI transport would quickly become the bottleneck - let’s say we’re morphing 20 CC parameters, it would take ~19.2ms just to send one value update for all individual parameters through the DIN-5 MIDI cable.

Regarding CC note trigger, do you mean to trigger some configure note number when the CC value crosses particular levels, always the same note number?

darn about the cc morphing thank you for the reply

Yes that is the basis for what I mean

every time the threshold gets crossed it triggers a settable note

hopefully this image will help 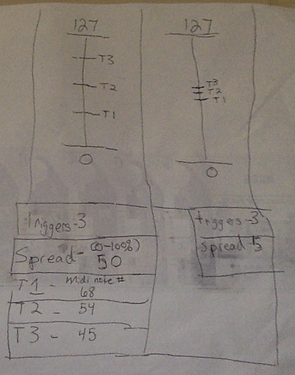 Interesting suggestion, I can see how this could be useful.

And it would be interesting to combine with an LFO pipe as well.

How would you name such a pipe?

YES! LFO into this would be awesome

just a little silly aside when I saw my package arrive from Lithuania I thought of my brothers wife Jurgita I wish I lived closer to them. She is a master gardener and bakes the most amazing not super sugary desserts.