I want to have a MIDI synced delay with MODEP. It seems like there’s only one effect available (Bollie Delay), is this right?

I tried to sync it with my hardware by connecting a generic “USB cable interface” to my RasPi. The interface is recognized properly but the displayed BPM doesn’t change.

The interface is working correctly and I can see the clock with jack_midi_dump. There’s no dedicated MIDI port for the effect exposed in Jack. I don’t know if this is correct. I also tried the MIDI clock effect but the global tempo isn’t changed either. The MIDI clock exposes a port in Jack but it’s not connected to the desired input. Doing so has no effect on the displayed BPM and there’s no clock emitted on the output.

Do you have any idea what’s going on? Is it a MODEP specific issue?

Bollie Delay uses tap tempo mechanism for setting the BPM, it does not make use of MIDI data at all, see https://github.com/MrBollie/bolliedelay.lv2 for more information.

You may install and use any lv2 plugin you like if you put it in /usr/modep/lv2, if you can find a delay plugin that supports MIDI sync, it will work. The UI will be default one, but you’ll be able to access all parameters through the plugins settings menu.

Bollie Delay uses tap tempo mechanism for setting the BPM, it does not make use of MIDI data at all, see https://github.com/MrBollie/bolliedelay.lv2 for more information.

Ok then the GUI for the plugin is either misleading or there’s some customization from Mod Devices?

And what do you think about the MIDI clock effect? This should be working, right?

You may install and use any lv2 plugin you like if you put it in /usr/modep/lv2 , if you can find a delay plugin that supports MIDI sync, it will work. The UI will be default one, but you’ll be able to access all parameters through the plugins settings menu.

Thanks! This sounds very exiting, gonna try this now.

You’re right, turns out it does support MIDI sync from external MIDI, I didn’t notice this control before.

At the moment it’s not available to be enabled in the UI, we’ll fix that, in the mean time, you may switch the mode by hand:

Save the file, restart MODEP:

Then it will be listening to external BPM.

Ok the MIDI flow is working now! But the Bollie Delay seems buggy, it just doesn’t emit any sound when it’s sync source is set to internal. But that’s not of your business

The lv2 installation is working as well. Sweeet! Tried the LSP collection but this is quite heavy stuff. Now I’m crawling for interesting things

But that’s not of your business

I just talked to the Mod guys and it seems that they’re using a different version of the delay.

Hi @Klaustrophil, it sounds like MODEP is using an older version of the Bollie Delay. This was an issue that has been solved in the newest version of the plugin. The previous version clears the delay buffer when the tempo is changed. Due to the fact...

The fix is not on the master branch: https://github.com/MrBollie/bolliedelay.lv2/tree/fractional

Ok, I’ve just released an updated version of modep-mod-ui and bolliedelay plugin. Get the update by running:

I am trying to sync an MPK Mini Play with USB Midi to Modep. I have just installed latest modep with apt as specified above, then I rebooted just to be sure. I have set “host sync” on Midi Clock plugin and “Mod/Host” for Tempo Mode on Bollie delay, and it never shows the BPM I have tapped out on the MPK Mini Play. Same with “Step Sequencer” plugin. I do see "MPK mini play MIDI 1 (in+out) selected in the Midi Ports List under “separated mode” checked.

Is there anything else I should need to do for this?

Did you enable external MIDI sync in the transport settings menu? (It’s accessible at the bottom of the UI)

There was no option for that. Turns out I had an old version of Patchbox pre-transport menu. I reflashed and see the global bpm settings now, I chose “midi” for “sync mode” and then used the “midi clock” plugin and chose “host sync” and it does not work with the external BPM of the MPK Mini, BUT does not show the BPM if I use “internal” and set the BPM that way.

Maybe I am still misunderstanding something for external devices, but good news is that the reflash shows the transport menu now and the internal global bpm clock is working, just not external clock.

Worth noting, if I click “midi” or “internal” in the transport menu a second time, after it is already selected, I see a “Bug! Couldn’t set new sync mode”, which seems unrelated to my issue but thought I would mention it. 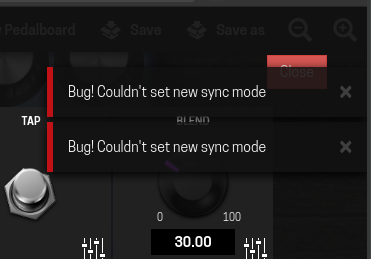 UPDATE: I just tested the MPK with Bitwig and my Tetra synth and confirmed it can function as a global clock for my Tetra. When I change the BPM on the MPK Mini, it does affect the tempo of my Tetra synth. So that part is confirmed to work.

UPDATE2: Oh neato, I don’t have to use Bitwig at all, MODEP can pass through the MIDI from MPK to Tetra and the clock from the MPK is working through MODEP to control the Tetra. (still no luck with the global transport though)

UPDATE3: And it appears the MIDI activity just crashed/froze the Pi with solid green AND solid red LEDs. Hrm. Both Tetra and MPK are hooked up to Pi with USB Midi.