I am really loving the Modep/Pisound setup that I have! I’ve been slowly working on my pedal boards in preparation for replacing a Line 6 Bass Pod XT. I’m almost to the point where I’m ready to ditch that pedal board (I use 1% of the sounds it has and it’s starting to show signs of end of life) in favor of using my Modep/Pisound setup. I even printed/laminated a small cheat sheet that I attached to the Pi power cord so I can remember button functions and the wifi hotspot info. 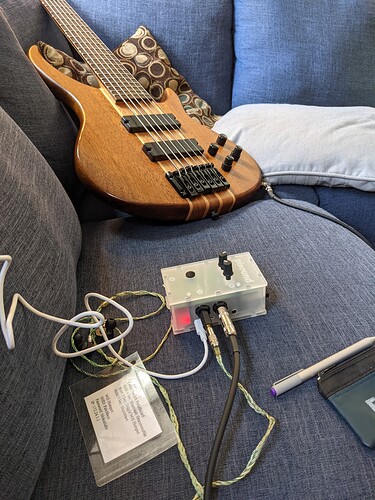 Beautiful bass! Is his body DIY?
Pls record some playing to us in order to hear it´s sound… (with/without MODEPs FXs of course).

That is actually a Peavey Grind. I was looking for a 6 string but didn’t want to break the bank. I found this one at a local Music Go Round for around $300. I improved the tone by adding an Audere preamp. For an inexpensive bass it plays and sounds fantastic!

I need to tweak my sound a bit and roll off some of the low end and once I do that I will post a recording.

BTW, last night was my first official rehearsal using PiSound/MODEP instead of using my Line6 Bass Pod XT. One of the first things I had to do was to toggle the ground lift on the direct box as there was a great deal of hum. Once I did that it was super quiet.

Once I started playing I realized my “tone” had too much bass and caused some distorting when playing through the PA.

I’m very interested in trying to build emulations of various amps. Namely Ampeg, Eden, GK, etc. I searched the forums over on the MOD website and there’s not a lot of bass players doing that (as far as I can tell). Would love to hear from any bass players who’ve created pedalboards that emulate mainstream bass amps. 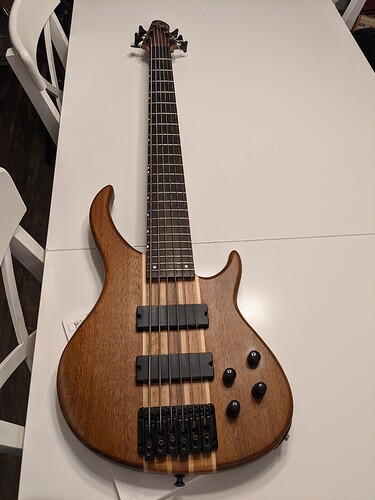 Here’s a better picture of the bass.

Here goes! I’m attaching two files, one recording the Peavey straight off the Pi using Audacity and the other using a pedal board named “Bass 2”. I know… real creative naming. I realize 2 things after I recorded these:

After the first recording the sound became very distorted and I had to reboot the Pi to get it working again. I wonder if I have something not set right for the PiSound interface.

Here’s the grind going straight through the Pi, no effects:

Here’s the grind with my “Bass 2” pedalboard:

You could try some different method of capturing audio, like the one described here: Overruns with arecord at 192 khz 2 channel - #3 by Giedrius