Hi, I have been using the MidiHub for a few weeks now and I am super happy about it. There is one very simple thing, though, that I found astonishingly difficult to do: Simple latching on a per note basis. Once a “Note On” message has been received for a specific note, the subsequent note off message should be ignored and the device should memorize this note. Once the same “Note On” is received again, it should be transformed into the corresponding “Note Off” message. Would be very useful, e.g. for drones, transforming arpeggios into evolving chords, using notes for mapped Midihub parameters and working with Launchpad devices. Is there a simple way of doing this that I have not figured out yet? If not, IMO that would be a very simple and highly versatile enhancement.

Second that, it would be a ver useful pipe imho.

Right now the substitute i’v come up with is note length as configured below when using an arp. 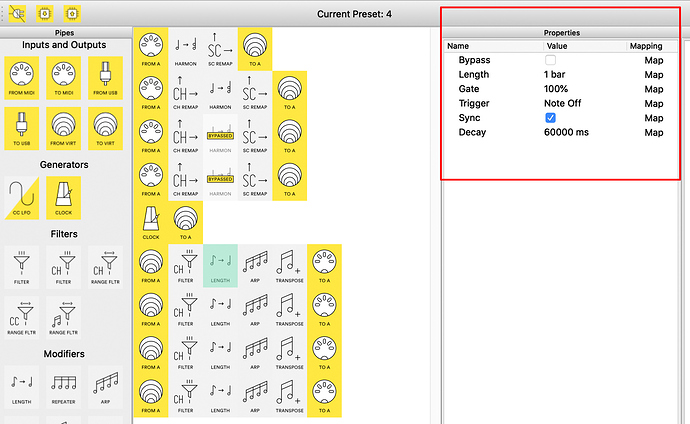 We could add a new ‘Latch’ mode to Sustain pipe to achieve this.

We’ll note this down.

Thanks a lot for the quick answer, that would be awesome!
In the interim, I may just hook up an arduino that does the latching, but dedicating one In/Out pair for such a small thing is fairly clumsy and a proper solution would be so much better.

Hi Giedrius! Any update on if and when Latch Sustain will be added?

Yeah, and maybe a Toggle mode, to the Sustain pipe, no ?

What do you mean by Toggle mode?

I mean : When you prress a note for the first time, for example, the first and following note off message is ignored. The second note on mesqage of the same note is then converted to a note off mesqage.
I explain it differently

Would be nice to use this with an lfo. Generate note on and off messages with different rates.

(Actually it may be possible with transform and sustain already. Gonna try that…)

Hello! Wondering if this feature made it into the product. If not, +1 on this…it’d be a very nice feature. Thanks!

I’ve added my vote. I particularly miss this feature for mapping; one of my keyboards can’t do very funky MIDI stuff, but since it’s 88-key and I rarely use the very lowest keys, I’ve tried to configure a split where the notes of the lowest keys are mapped all the way down. It almost works, except that Midihub doesn’t let me configure whether the mapping trigger is latching (Note-On to Note-On) or momentary (Note-On to Note-Off).