Am I doing something wrong here? I’m just received my pisound and I am trying to get the pisound software installed on the raspberry pi. Any advice would be greatly appreciated. 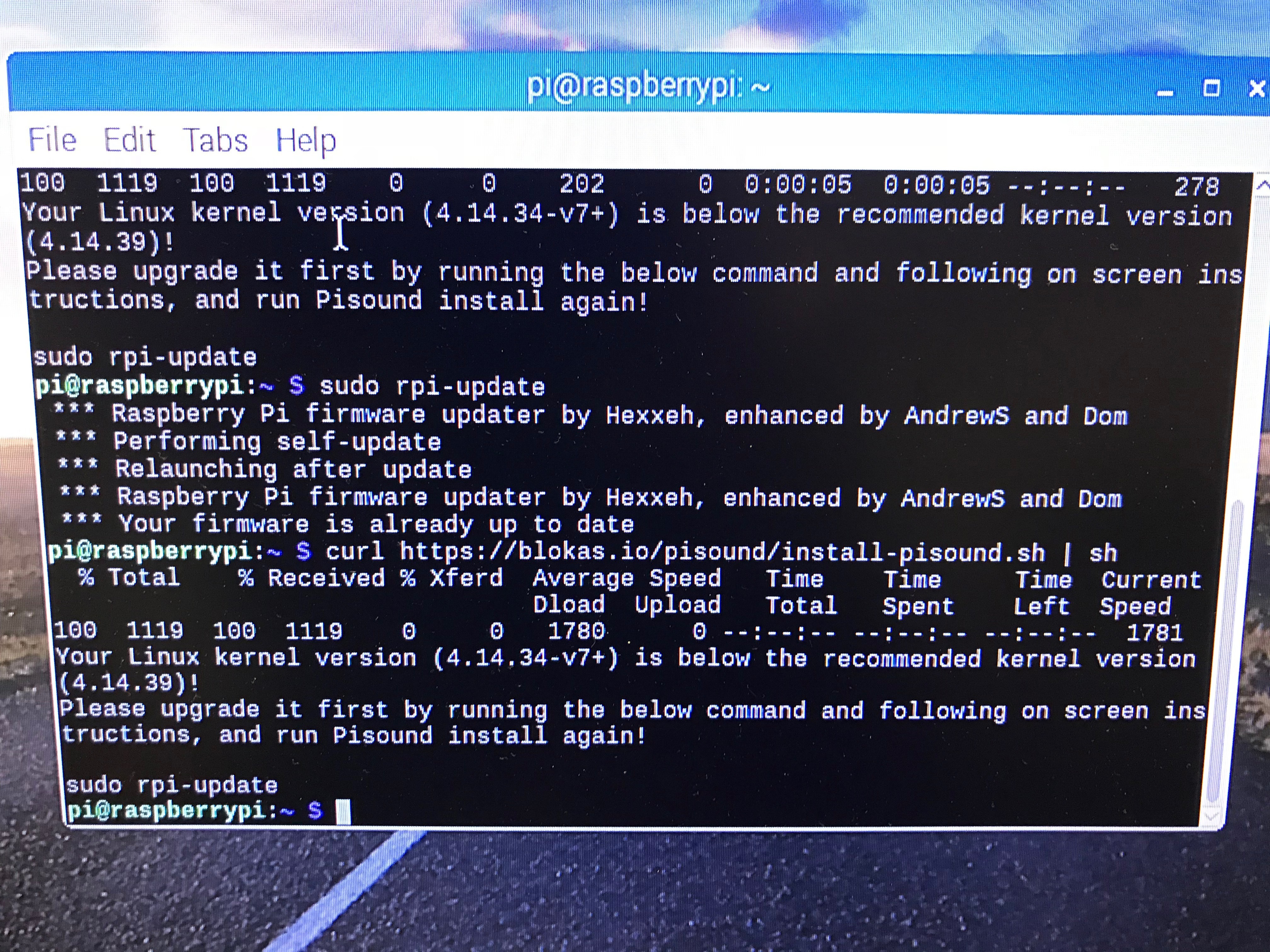 Then reboot and run the install script again.

I have tried this a quite a few times. I run: sudo rpi-update It tells me my firmware is already up to date. I restart. Try to run the pisound install script and get the same error you see above. Should sudo rpi-update be updating to a kernel version above 4.14.34-v7+?

I may have had some luck. I was able to get rpi-update to update specifically to 4.14.39. Rebooting now.

I can’t try and reproduce this issue myself at the moment, however, to get around the kernel version check, you can just manually run the remainder of install-pisound.sh, by copying the below block into a terminal and pasting it:

and update the kernel at a later time, the issue with pre 4.14.39 versions is ‘snd_pcm_delay failed’ error printed in software like Pure Data on high load.

As long as it’s >= 4.14.39, it should be good to go, not strictly necessary to use very latest with Pisound

I’m having this same difficulty. I keep doing the sudo rpi-update and reboot, but I keep getting the same message telling me to do this.

I’m running raspbian buster, which I just loaded up on a new SD card. Any ideas?

What is the output of uname -a?

Good news is that I copied that block of code from earlier in this thread and I got it installed! Seems to be working well!

Thanks for posting that:)

Hmm, weird, I tried reproducing this issue with Raspbian Buster, but it went just fine. Did you do some customizations / setup to the OS before running the install script? Like for example, changing your locale, system language, default shell, or anything else that could be important? Is it Raspbian Lite or Desktop?

I didn’t change anything on it. Just installed Raspian buster with desktop, installed the VNC viewer, then attempted the pisound install.

What is the oldest kernel version Pisound can run on ?
Jetson Nano is built against 4.9.140, can I still make pisound work on it?

Pisound module has worked fine on kernel version branches 4.4, 4.9, 4.14. It itself depends on some other parts in the kernel like ALSA SoC modules and I²S module specific to the target board / processor to be available and configured correctly. Each board vendor usually maintains their own variation of Linux kernel, so the exact build versions are not easily comparable between different board kinds.

Thank you very much for your answer !