I would like to ask the following question of other users who are more familiar with MIDIhub and its pipes.

I have a MIDI controller keyboard with an expression foot pedal attached (to send MIDI CC 11 data). The pedal (via the MIDI keyboard) sends a range of values from 0 (when the pedal is not depressed) to 127 (when it is fully depressed). I would like for all of the MIDI messages from the MIDI keyboard to pass through MIDIhub unchanged from its source to its destination (MIDI A to USB A), EXCEPT for the expression pedal values: I would like for those MIDI CC 11 expression values to be inverted: from 0-127 to 127-0.

The first Transform pipe swaps the CC ID and Value places, so that CC Remap can invert the value as needed, and then another Transform puts it back into place.

In some future update, we plan to revisit the pipes to allow doing such operations in a more straightforward fashion.

Btw. to avoid non-CC message duplication, add a Filter pipe to drop everything but Control Change messages in the 2nd line. Forgot to add that there myself.

Thank you very much, Giedrius!

From experimenting, the following also seems to work.

The only thing that is a bit counter-intuitive are the labels for the parameters in the Rescale pipe: “In Low,” “In High” and “Out Low,” “Out High,” which could possibly be relabeled as something like “In From,” “In To,” and “Out From,” “Out To” (in case the user wants the rescaled range to be from a higher value to a lower value, such as in this case) 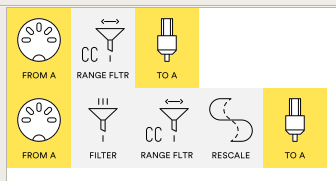 Ah, this works even better than my proposed solution!

In my experimental solution above (the 3rd post), the Rescale modifier successfully inverted the values from the expression pedal (MIDI CC 11), with the following settings:
Kind: Control Change
In Low: 0
In High: 127
Out Low: 127
Out High: 0

A “CC Inverter” modifier might include two parameters for example, the first to specify which MIDI CC number(s) to apply the inversion to, and the second to specify which of two values or a range of values to invert. For example, the second parameter could be programmed to be user-edited to contain either a comma separated list of two values (like 0, 127 or 56, 12) or a hyphen-separated range (like 0-127 or 64-84). In the first (comma-separated) example, the modifier would invert the first value to the second value and vice versa (0 to 127 and 127 to 0, or 56 to 12 and 12 to 56), and in the second (hyphen-separated) case the modifier would invert each value within the range to its opposite (only the middle value of an odd-number range would remain unchanged).

Hey, we’ve released a fix for the In Low > In High case for Remap pipes.

Thank you so much for MIDIhub firmware 1.11.8. It works perfectly so far to invert a range of values, including with the following settings:
In Low: 127
In High: 0
Out Low: 0
Out High: 127

And thank you so much for considering a dedicated CC Inverter pipe.

MIDIhub was a great idea to invent, design and to bring into reality, and has been so nicely and thoughtfully implemented. I love that the MIDIhub and editor work perfectly in Linux (my primary OS) as well as Windows and Mac.