Hello
I have a Suzuki midi melodion and a mc 101

The Suzuki transmits ,fixed note velocity , midi volume (cc7) and aftertouch when you blow into it and press a key , according to logic

The mc records the fixed note velocity , but doesn’t record the midi volume and aftertouch , the Suzuki does trigger the values of those two things as I can see them move in the tone settings when I blow into it , the problem with the mc is that it only records 4 cc lanes 80-83 , they correspond to the four knobs on the front panel , you can then assign parameters to those knobs , so I can assign level(cc7) to one knob and the aftertouch to another .
What I need to do is convert cc 7 to cc83 and after touch to cc 81 so I can record the aftertouch and volume changes
I’ve been messing around today trying to set this up to no avail , so I’d appreciate some help .
I’ll upload some screenshots of how I’m trying to set up the pipe 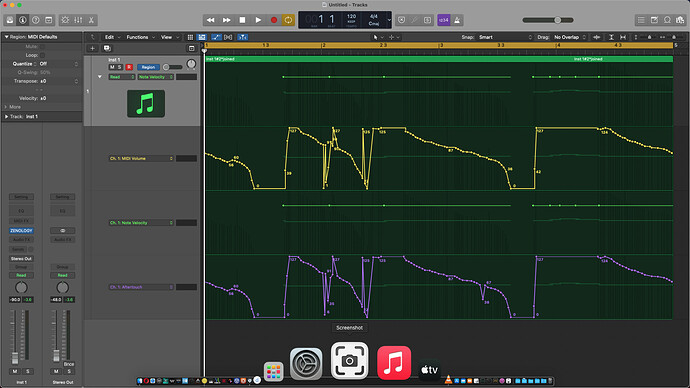 I’ve got a little further after reading some threads here and looking at some examples , I’m getting the mc to record some of the cc values , it’s not working properly tho.
This is what I’ve set up so far , tho I’ve been changing bits around , I’ve got two pipes ( tho now I’m thinking I should merge them into one using a virtual port )

one for the volume and one for the aftertouch,( there’s actually 3 pipes in the image , the 3rd pipe I set up first for note on/off , that still actually sends everything, I think I need to filter out everything apart from note messages on that one) unless I can merge all three things into one pipe ?

In the other two pipes I’ve set a channel filter , filtering out 2-16 , then a filter blocking every thing apart from cc and aftertouch, on the cc pipe , I’ve set a cc range filter , and blocked cc 1-6 , 8-127 ( I think) so only cc 7 is getting through, then a transformer, transforming cc to cc , I’m assuming that as only 7 is getting through I don’t need to tell the transformer the cc I want to change , I have set it to, change to cc 83 .
The other pipe transforms aftertouch to cc 81 using pressure 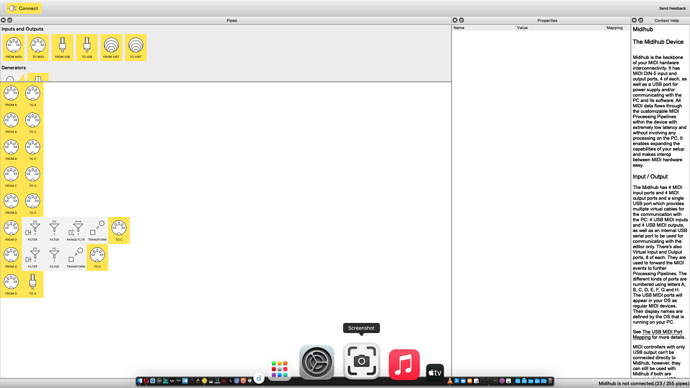 Ok , I think I’ve got it , I can rec on both the converted cc numbers with identical values , and it plays back pretty well , it’s definitely recording my breath which is triggering the mc tone using midi volume , without there being a midi note .

Here’s my pipe if anyone can look at it and see if I can improve it .
Thanks 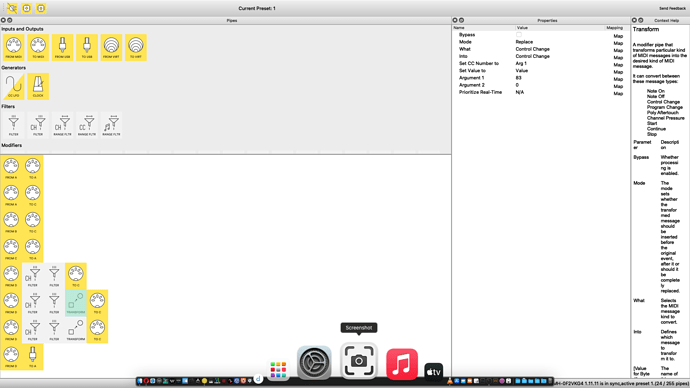 I’m assuming that as only 7 is getting through I don’t need to tell the transformer the cc I want to change , I have set it to, change to cc 83

Yes, any CC passing through that Transform pipe will get converted to CC 83. Another way to do it would be to put in a CC Remap pipe, and set In Low 0, In High 127, Out Low and Out High both to 83.

Thanks for the reply , I’d overlooked cc remap , so I’ll set cc 7 to remap to 83 instead of transforming it .