I want to transform chromatic Note Numbers to velocity Values.
(with that I can use the slide arpeggiator from my Electribe EMX to record funky drum patterns…maybe

Any ideas for that?

Could you show some example source messages and desired results?

Just like the Transform Pipe in Midihub transforms one CC
into another CC, I want to transform Note Number into CC.

I am working on PD to make that work but there is no input from my Electribe (DIN Midi connected to my MIDIHUB), on the other side all USB devices generate Note Numbers to PD (patched via amidiminder on my RPi Zero)

So you want a note number to be transformed into a CC value? Originally you wrote to Velocity, which is a different thing.

The default configuration when you place a new Transform pipe is set up to convert note velocity into CC #3 value. You may simply change the “Set Value to” argument so it says “Note Number”.

yes, my post was misleading: Let´s say I want to convert a chromatic scale (the notes are generated by a arpeggiator and varied by a slider from 0 to 127) into CC7, which is volume.
Velocity would be even better but I guess as it is part of the note message itself, I can´t do this with the Transform pipe.

I´ve seen a YT video on your channel where Tobias and Max are nearly doing this, but they use “Note value” to transform, which is not available in the actual editor anymore.
As i think you got one step further, a new video would help explaining especially the arg1 and arg 2 settings

The Transform pipe was extended to give more control over what and how it does its processing. Everything that was previously possible to do is still possible with the new version of the pipe. The biggest advantage of the new version is that it allows specifying what happens with all values in a MIDI message, rather than working with just one of them.

To understand how Transform pipe works, you have to know what data values the messages you’re transforming look like. Note On/Off messages have Note Number and Note Velocity values, CC has a CC Number and CC Value. So you want to transform Note On events to CCs, by setting CC Number to be always 7. This can be achieved by setting Arg1 or Arg2 to value ‘7’ and picking the correct ArgN for ‘Set CC Number to’ pipe property. Then you want the note velocity to be used for CC’s value, so you have to set ‘Set Value to’ property to ‘Velocity’.

The Arg1 and Arg2 are just state variables that you can preset to any constant value (or have them mapped to some MIDI control). If they are not referenced by “Set ___ to” properties of the pipe, they don’t have any effect at all.

This is how the properties should look like to achieve the Note Number to CC #7 Value: 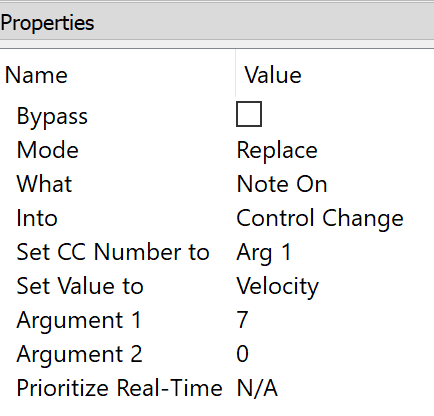 Btw, to get Note Number converted to the CC value, just change ‘Set Value to: Velocity’ above to ‘Note Number’