Let’s collect bugs in one topic:

Same on the Windows version. Thanks for pointing this out.

edit: ok I read that the 5th port shouldn’t be used… I think thats confusing and either it should be named differently or hidden

Unfortunately Midihub is not in control of the naming - the various different OSes take care of that via their MIDI driver impementations.

Do you have a suggestion for the best place to put this information, so it’s noticeable and clear to the user, and can’t be missed?

We’ll very likely have a short ‘Getting Started’ guide printed for the retail version, and some more material on the website for the device where we could mention this point.

This kind of feedback is really helpful for us to know which things to state more explicitly.

This might be me being noob-ish, but I can’t get the note remap to work as I intend (I think there is a similar problem with channel remap…)

I think it does the same thing with channel remap, outputting only on channel 10 when both the In low and In high are set to the same value.

In summary, I can’t remap a single note. The remap pipe needs to have at least 2 notes input (which isn’t practical as I’m trying to remap each adjacent notes individually)

I don’t know if that makes sens, in any case, hit me up if you need me to reformulate or to try to explain things differently …

Thank you for noticing this, indeed this is a bug, it should work as you expect. We’ll fix it in the next update.

this happens quite often to me:
if I add a note-remap into an active midi-stream (say a note-sequence of a midi-sequencer) and change there value of the note-remapper it results in a permanent very low note. I have to force my sequencer to send a note- off for all notes to quit this note

and something else:
i have the following setup: 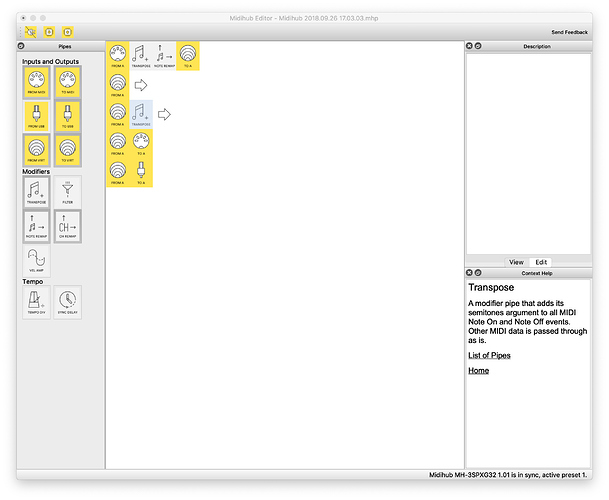 I’m just experimenting to create chord-generator - the synth that receives it is on midi-outA
the top-row should do some basic shifting of the sequence and send it to a virtual port
the second, third and fourth row take the input from he virtual input build the chord by using different transposes and send it to midiout-A
the last row just sends the data to my midi-monitor

Thank you for the reports. Yes, there shouldn’t be a low note remaining, and it could be related to that previous issue. I’ll try and see if I can reproduce this. Btw, you can send ‘all notes off’ by holding down the button for a second or so, see device->settings menu to customize the behavior.

Could you attach a .mhp file to this post that shows the issue above?

I found out how to replicate the infinity held note :
open my example mhp-file Midihub 2018.09.27 16.10.24.mhp (57 Bytes)
play a midi sequence with at least one longer note
change the “out low” value of the note-remapper- hit ok while the long note of the midi-sequence plays
then this note will play forever
delete the note-remapper in the right moment and you’ll get a very low infinity note

the same happens with just a transpose operator

But since you’re remapping on the fly wouldn’t a held note be expected? Unless Midihub ends NoteOff for every remapping that is changed during operation.

We could experiment with sending an ‘all notes off’ CC command whenever a parameter that could cause a stuck note is tweaked to the affected output ports. I think we’ll do that and see how well it works in practice.