Hey guys, here’s a another update for Midihub, with focus on quality and usability improvements, getting ready for public release!

Please give this version a decent try and let us know if you find any issues or think something can be improved.

If it’s something you mentioned before, please feel free to reiterate, so it doesn’t get missed. 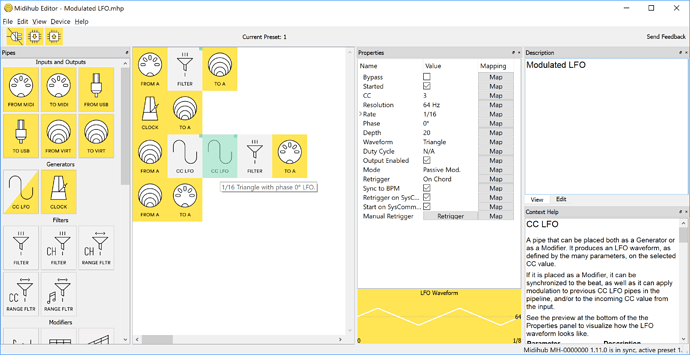 On Linux, run chmod +x on the downloaded AppImage file, then execute it either via the terminal or file browser. Installing appimaged for desktop integration is recommended - it installs the shortcut to system menu.

Compatible with public release units too, so it’s universal.

The Midihub Beta units from now on should be upgraded via the Firmware Flasher tool, as the latest version of the editor no longer can talk with the Beta bootloader version. The main firmware after upgrading will continue to work with the Beta units and the latest editor version(s) for the foreseeable future.

To update the Midihub firmware, switch it on while holding down The Button. In the firmware upgrade mode, all the LEDs should be lit up. Run the Firmware Flasher, select the .bfw file and hit ‘Flash’.

* All stored presets and microtunings will be removed during the firmware upgrade process, especially when using Firmware Flasher * - fortunately starting from the 1.11.0 version, there’s an option to make a backup of the entire memory contents (presets, microtunings, settings). Before upgrading to this version, you’ll still have to back it up manually by loading each preset and saving them to disk with different names.

A bit late, but just wanted to say that I downloaded both and updated the Midihub and editor with no problems whatsoever. Everything seems to be running smoothly so far. Didn’t push it too hard, but first impressions are good.

Thank you for letting us know!

Btw, which OS are you using for the editor?

I’m running the editor on Windows 10 64-bit. No problems so far.